I woke at 7am, had a coffee and recharged my phone and camera batteries before beginning to pack for the long trip back to the UK.

The sky outside my window was lead grey and for the first time since I arrived the air hung heavy with anticipated rain.

As I packed I mentally worked through my “to do list” for the trip and with the exceptions of: see Mount Fuji (partially achieved) and photograph Japanese fish and chips (on today’s list) I think I’ve achieved everything I set out to do.

One meeting sadly had to be cancelled but the list item I most expected to fall through (shoot fireflies at night) worked out.

It’s been exhausting but I’ve really enjoyed it.

I’ve visited 7 cities in 10 days, 4 of which I’d never been to before, and of the three return cities I’ve visited parts I’d never been to before in two of them; I’ve shot around 2000 images; visited 6 galleries and seen 9 separate exhibitions; tried new food and drink; used new forms of transport but also took time to revisit some old favourite locations and restaurants.

I’ve created images for 3 separate on going collections and exhibitions while beginning work on an entirely new project.

All in its been a very enjoyable, exhausting but rewarding trip and I’m grateful to have had the opportunity to make it.

The plans for today were simple: Check out of the hotel, place my suitcase in storage near to the train station (for easy departure later this evening) then try to relax, finish shopping, eat and generally try to squeeze the last drops out of what has been a very successful trip.

I’ll update as time (and wifi connection) allows during the day!

Most of my gift shopping has been done, probably going to have issues getting some of the items home due to fragility/size but I’m sure I’m well under the 25kg weight limit.

Stopped off for a tea, and some internet access, before taking a final street photo wander around shinsaibashi and dotonburi.

My plan remains to visit The Hub later for fish and chips (and more free wifi!) Before picking up my case and heading out towards the airport.

After McDonalds earlier I visited Shinsaibashi and moved on to Amerikamura and chilled in the sun for a while before finishing my gift shopping and trekking all the way to Den Den town for some import music only to find nothing I wanted. 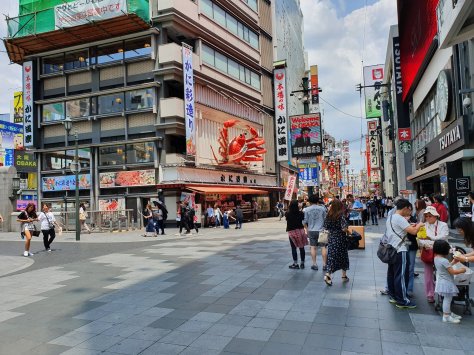 I tried to get to The Hub only to find its closed until 4pm today so the chances of the fish and chips photography just decreased dramatically as I’d been planning on leaving Osaka before 5pm to increase the chance of actually getting a seat on the train out to the airport!

Instead I returned to a lovely little bar that Hayley and I discovered last time we were both here and relaxed with a beer (and some free wifi for the update!)

Possibly my only selfie of the trip – taken at Amerikamura earlier this afternoon as I did a spot of people watching in what is probably one of the best areas in Osaka to just chill and watch the world go by. It’s a great location where Japanese punks mix freely with j-pop fans, the glamorous beautiful people, the fashion conscious, rock and roll types and the homeless.

Today we even had a Japanese biker sporting a leather jacket, arms full of tattoos and a rather fetching WW2 Nazi Swastika attached to his leg! As I said, anything goes!

So, after a beer and a blog update, it’s back to the train station to retrieve my bag, attempt to pack my new shopping into the case without breaking anything before heading for the airport line for Kansai International Airport and the long trip back to Scotland.

I’ve got a very busy few days ahead but hopefully I can begin to edit and share some of the images from the trip on social media over the weekend.

I hope you’ve enjoyed hearing about the trip! At the moment I don’t have any fixed plans to return, but with lots still to do I think it’s safe to say I’ll be looking to return to Japan sooner rather than later! You can also keep up to date with the various business ventures on my website and Facebook pages! (Also if you haven’t already – please go follow my Instagram page as many of the new pics will appear there first!)