I woke this morning and the first thing I did was check the weather forecasts. Osaka was still due some serious rain and thunderstorms while Tokyo was to start off overcast with a chance of rain later.

I decided to visit the gallery early, as per yesterdays blog, then head for the Shinkansen back to Osaka.

It was a brief 5 minute walk to the gallery, but I was early so I stopped off for a coffee on route, and still got to the gallery just 10 minutes after opening time.

The gallery is, as its name would suggest, linked to Canon, the brand of camera I’ve used since 1986 when I bought my first ever SLR, the Canon A1 film camera.

I entered the gallery and was immediately impressed by the work on display. An exhibition by a Japanese photographer who’s photo style and choice of subject was very like my own.

After a chat with the photographer and the gallery staff I bought his exhibition photo book, which he kindly signed for me, before i returned to the hotel to check out.

Tokyo was tempting me to stay as a light rain began to fall – which was very welcome after the unrelenting heat of the last few days – but I was resigned to returning to Osaka and the chance of some lightening bolts in my photos!

When I bought my green card pass the instructions I received were fairly clear: Reserving a seat was essential during rush hours (7-10am, 4-6pm) but all other times there was no need to reserve.

My train was at 12.33 so I didn’t make a reservation and proceeded straight to one of the three green cars…

Before continuing, I should explain that I had wondered about this part of the process before. In the UK if a seat is reserved on a train theres usually a note to say, either electronically above the seat or at it’s most basic a ticket stub on the chair.They have nothing like that on the Shinkansen so there literally is no way of telling, visually at least, if a seat has been reserved for the journey or not.

The carriage was fairly empty so I selected a seat at the back and sat down.

Just before the train was due to leave a stern faced fellow came on and insisted I was in his seat, i immediately apologised and got up to leave but after one of those “bloody tourists” kind of looks he pointed in the direction of the unreserved cheap seats up front and said “go to those” in a tone which really annoyed me.

Now i know I was in the wrong and normally I’d just walk away to avoid a fuss but today I thought nope… so instead I made my way to the conductors office (on the train) and explained the situation; a quick check on his system showed several unreserved seats for the full trip to Osaka so I selected one of those.

The conductor kindly showed me to the seat – which was further up the same car as Mr Stern-face, so before sitting I caught his eye and politely and respectfully bowed to him, desperately trying to avoid a chorus of “milk, lemonade, chocolate” as I did so… he was not happy!

As I’ve said, I know I was in the wrong and that he had every right to ask me to move and I was more than happy to move, even going to the point of being overly apologetic, but it was that dismissive look and tone that bothered me.

Anyway, thought I’d share this incident to let anyone thinking of using the Japan Rail Pass that on busy routes it’s probably best to reserve a seat regardless of the time and avoid any potential embarrassment, despite the advice given with the card…

Settled in my new seat, the Shinkansen left Tokyo slightly later than scheduled and as we whizzed towards Nagoya the rain became heavier and heavier. Clearly this gave me absolutely no chance of seeing Mount Fuji but did give me increasing confidence that I’d made the right decision in leaving Tokyo early. 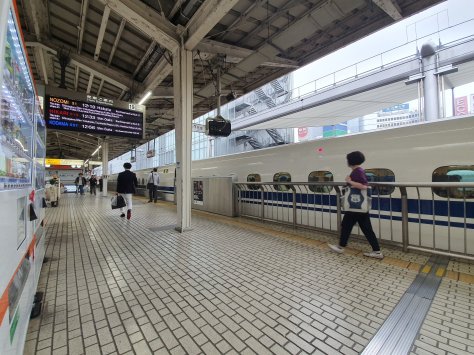 The only view of Fuji-San I had today…

I arrived back in Osaka and as I’m sure you could have guessed, it wasnt raining.

I got back to the hotel, left my Tokyo bag and headed back out for a walk and some food – ever hopeful that the downpour would arrive any moment. 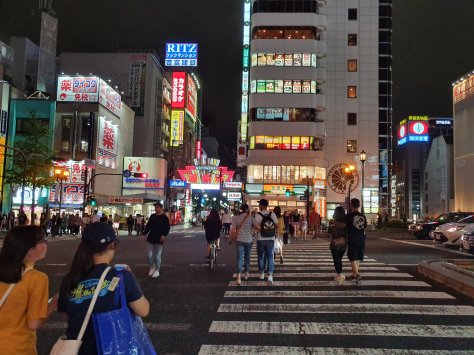 It didn’t, so I headed for a restaurant, ordered teriyaki chicken, rice and miso soup, then headed back to the hotel.

At the moment I’ve nothing planned for tomorrow. It was to be a rest day and a day for souvenir shopping. The weather forecast says “heavy rain with thunder” but after today I’m taking that with a large pinch of salt!

If I do wake to heavy rain then I’ll switch things around and have a photo day. Otherwise I’m planning on a chilled out day for a change!