I’m writing this around 2/3rds of the way through day 9 as it’s been a very busy couple of days!

Day 8 started with me rising around 5am with a plan to head to Hiroshima for the day, but overnight I’d received messages from Andrew Thomas, an English film, commercial and documentary producer, director and writer who I’d met back in August when I was last here.

Andrew lives in Nara and had invited me to go spend the day there, with a view to introducing me to some parts of the city I hadn’t visited before, catching up on some potential collaboration ideas and just hanging out for a day. There was also the possibility of photographing fireflies after dark which was one of the original reasons this trip was happening at this time rather than later in the year.

So Hiroshima was shelved again (sorry!) and instead i made my way to Nara, ancient capital of Japan. Once at the station I made my way through Nara deer park (quite a few baby deer bouncing about on this visit) then on to the floating pavilion of Ukimi-do. 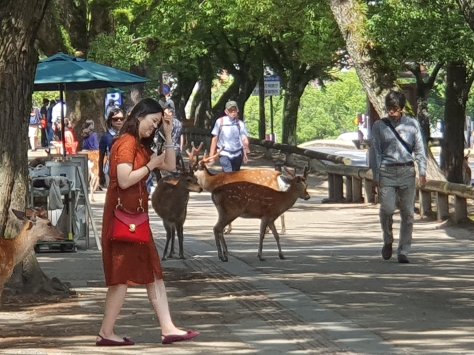 I’d discovered this pavillion last August entirely by chance when walking to the Nara museum of Photography but it was very busy at the time. Today it was quiet so I walked around snapping away for a while.

Andrew had brought his car so for the first time in 7 trips to Japan I found myself in private transport heading for our first stop of the day, the mountain viewpoint of Zoshicho high above Todai-ji temple and with stunning views across Nara.

We spent some time at the summit catching up with business ideas then it was back into the car and down to Nara for a visit to the former home of Japanese photographer Taikichie Irie.

After a tour of the house we set off on a walking tour of Nara, stopping at locations which Taikichie Irie had photographed many years ago and comparing the locations now with his photographs. It was very interesting to see the changes that have taken place in such a relatively short period of time, albeit a time of great upheaval as much of his work was carried out in the aftermath of the Second World War and against a background of American occupation.

After the tour we set off for a bite to eat (I had a spicy lamb curry with rice!) and a glass of locally brewed IPA ale. (Which was lovely!)

Food consumed and with sunset not too far off we made our way to the Buddhist temple of Nigatsu-do, another location I’ve never visited before and a great spot to watch the sunset.

Unfortunately tonight’s sunset was very overcast and didn’t quite work photographically but it’s a great location and one I’ll definitely revisit on my next trip to Japan.

As the light started to fade we set off for a potential viewpoint where fireflies had been spotted the night before.

It clearly had great potential as several locals, many of whom had professional looking camera equipment with them, were already set up with cameras trained on a small grassy area, surrounded by trees and with a small stream running through it.

I selected a nice viewpoint, set up my tripod and camera and the waiting began… it was quite a while after sunset and in almost today darkness before the first wave of “ooooh” accompanied the first glimpse of a dim green light which pulsated in the darkness several times before disappearing again into the dark. One became two then three and then more as the air above the stream came alive in tiny glowing spheres of green/yellow light which would arc and dance around the base of the trees and over the water.

It was an amazing sight, something I’d never seen before (except on tv) and I was lucky to get to photograph it.

Since getting back to the hotel I’ve had a look at the images and can confirm that – at first look anyway – I managed to capture a few amazing images of these tiny creatures as they lit the forest floor in what is, just like last years Sakura season, a very fleeting and transient season in Japan.

Once again I cant believe how lucky I’ve been with timing!

After an hour or so photographing in the dark we decided head back into town for a beer and a bite to eat.

We visited a lovely little place called Kura where we relaxed for a while with local people, local food, a beer and some absolutely amazing Sake. Most of the sake I’ve tried back home is quite bitter but the one we had tonight was really smooth and easy to drink.

By now it was getting late so I headed back on the second last train of the night to Osaka then the walk back through the quiet streets of Namba to my hotel, getting back around midnight.

A great day (thanks Andy!), another “to do” off the list (photograph fireflies after dark) and some business plans made for future work.

I fell into bed and after 20 minutes or so of catching up with emails and messages from back home I was fast asleep!