Landscape photographers are fortunate in many ways when compared to our colleagues in other photographic disciplines.

For the most part our subjects are static, we do not need to “pose” or cajole them, nor do we need to snap them before they fly off or run away. We do not have the pressure of knowing that we only have one-shot to tell the story we’re after and, despite our ego’s telling us otherwise, we rarely have the stress of knowing that our failure to deliver may well ruin someone’s “special day”.

Yes, there can be hours of walking or climbing with back-packs full of heavy gear just to get the shot we want, and yes, there can be delays and frustrations if the weather isn’t just how we’d like it, but, on the whole, I’m glad I’ve chosen Landscape photography and find it a lot less stressful than the other options.

The downside of all this though, is that many landscape photographers (and I’m including myself here) become lazy, restricting themselves to only shooting during the “Golden Hours” around sunrise and sunset, avoiding mid-day and poor weather conditions at all cost. How often do we simply roll over and go back to sleep if the weather isn’t looking too promising when we glance out of the window a few hours before sunrise on a cold, damp morning?

So, what’s my point?

Well, I recently posted a photograph on Facebook of a well-known loch in Glencoe, Scotland. The shot was taken during a particularly rainy day and to be honest, I really wasn’t convinced it was working, but, I persevered and shot a few frames. I was genuinely surprised at the reaction the image got, with more than 3000 views, shares, comments and “likes” within 12 hours of posting it online.

Now, while I was setting up this shot I counted three other photographers stop, look around at the scene and leave again without taking a single image. One even went so far as to set-up his tripod, and unpack the camera, stand around for a while hoping the light would “improve” then change his mind and pack it all up again without taking a photo!

Now, I’m not criticising this approach. As I’ve said, I’m as guilty as the next person for adopting the “it’ll be better next time I visit” attitude, but, if we adopt the approach of some of our more time restricted colleagues and try to retrieve something from a less than ideal situation, I believe our photography improves as a result. 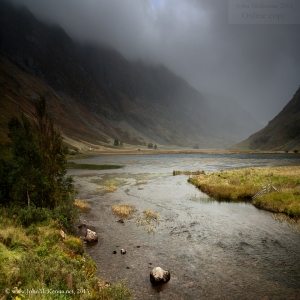 These two photographs were taken from approximately the same location, one in reasonably nice (but cold) weather in April 2013. The other taken during very heavy rain in September 2013. Both shots were taken around mid-day.

I’m happier with the “bad light / poor weather” shot and feel that it adds to the drama and rugged feel of the landscape. Now, I know this light will not suit all possible landscapes, but, from now on whenever I get the opportunity to set out with my camera, poor weather may influence my choice of location, but, it will not stop me from heading out!

Had a few hours to kill today, so found myself at Loch Chon in the shadow of Ben Lomond, then after a lovely wander (and lunch) at Stronachlachar on the shores of Loch Katrine, spent an hour sitting on the pier at Inversnaid and watching waves of rain climb over the hills to the west but not quite make it across the loch to where I sat…

Beautiful day on the quieter side of Loch Lomond.

Even resisted the normally irresistible urge to have a beer in the Inversnaid Hotel!

As always, photos will be posted on my Facebook page :

Please feel free to visit the page and “like” the page (not just the photos) for regular updates and future competitions! 😉

Great weekend for anyone planning a visit to Glasgow.
Doors Open is an annual event where visitors are given the opportunity to visit some of Glasgow’s historical buildings, many of which are normally closed to the public, all for free!

Great opportunities for photography (they even run a competition to make it interesting!) or just good old curiosity…

This year, I’m hoping to get along to the following (amongst others!):

As always, any photos will be posted on my Facebook page.

Work (the paid variety this time) takes me to the town of Dumbarton this morning.

As Dumbarton Castle features in at least three of my current photo projects, and despite the fact it’s currently blowing a gale and raining on site, I’m taking my camera gear with me… just in case the opportunity presents itself.
Ever the optimist, plus, I’ve yet to try out my waterproof casing, so fingers crossed that I get some useful shots! 🙂

I guess the moral of this post is, BE PREPARED!  I rarely leave the office now without a camera.

As always, any shots deemed good enough, will be posted on my photography Facebook page.
https://www.facebook.com/JohnMcKenna.Photography?ref=hl

Feel free to “LIKE” my Facebook page to keep updated with my work, and also, to be in with a chance of winning some exclusive “like” only downloads, screen savers and limited edition prints!

Woke this morning to some beautiful clear blue skies so I’ve decided that, as most of my real work is up to date, today should be a “Photo Day”

Not sure where to go today though.  Choices are:

Keep updated, and see the results of todays walk by “liking” my photography page on Facebook, or, following this photoblog! 🙂

Today, I’ll be continuing with my current photo-project based around the lives of some famous Scots from history, with a walk and photoshoot in and around Loch Leven Castle, Kinross, Fife.

Loch Leven Castle is where Mary, Queen of Scots was imprisoned between 1567-1568.
During her imprisonment, she was forced to abdicate in favour of her infant son, King James the VI of Scotland, before eventually escaping from the castle in May 1568.

Current weather conditions are dry with some hazy sunshine.  Hoping to catch the castle peaking out of the mist on the boat trip over to the isle!