A great day spent in the north of Osaka; a day of firsts and of seeing an old favourite in a new way.

The morning started with breakfast at Umeda before boarding the train to Ishibashi and the connection to Minoh.

I mentioned yesterday that I had a print for a man we met last year and was hoping to give him a copy as a gift. As we approached Minoh station what began as a good idea started to change as we joked about how the whole scenario might appear from his point of view… he’d be sitting in his usual spot feeding his friend the crow when suddenly a strange western fellow turns up, presents him with a photograph of himself which he probably doesn’t even remember having taken, then is asked to pose for another, this time WITH the weird westerner! At the very least it’s a strange start to the day for the man, and at worst it’s kinda creepy! My Japanese isn’t that good that id be confident in my ability to explain what was going on before it became awkward so the whole thing began to feel like a bad idea suddenly!

So, it was with some trepidation that we started out on the 4km walk to the falls at the head of the wooded valley of Minoo Park! As we approached the spot where he usually sits I was in two minds about even approaching him but the issue never arose as his seat was empty and there was no sign of the friendly crow.

We paused for some photographs at a temple which was surrounded by blossoms in full bloom before continuing onwards past the spot where we encountered a troup of monkey’s last year and on up towards Minoo Falls.

About a kilometre from the falls we discovered the route was closed due to typhoon damage (We later saw evidence of a huge landslide) so we had to take a detour along a path I’d never even noticed before which climbed higher than the main route before skirting the side of a hill and dropping back down to re-join the main pathway, beyond the damaged section and just a short climb from the waterfalls.

Although the detour was much harder on the legs and the path a lot less defined, i think I preferred the new route. It reminded me of Scotland; it was a lot more rugged and natural and felt familiar even though I’d never been there before.

At the top we paused to take some photographs, despite there being very few blossoms on this part of the walk.

I was asked by a couple of ladies to take some photos using their mobile then we sat down for some lunch. 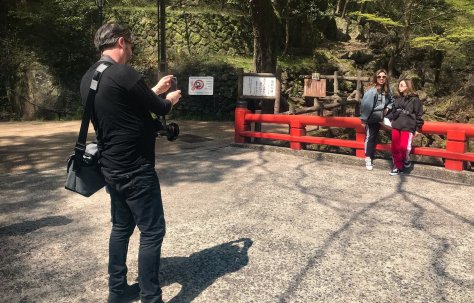 As we were eating I noticed an old branch on a tree high above the pathway which was being side lit against a backdrop of a cherry blossom tree. I grabbed my camera for an “arty” shot of the twisted branch against the delicate pink background but just as I was about to take the shot a huge monkey casually wandered along the branch and sat down to groom itself in the sun.

It was perfect timing as id already changed to my 70-300mm zoom lens so i grabbed a few shots of the monkey with the blossom background before he turned and casually disappeared again into the trees. I’ll post one of the images of him when I get back home to Scotland.

The return back down the path was interrupted only by pausing to take more blossom pics at the temple. The man and his crow friend still weren’t around so we headed back to the station, armed with a snack of maple leaf tempura, then set off on route to the nearest monorail station.

I’d never been on the monorail in Osaka. In fact I didnt even realise there was a monorail system until a Google search a couple of weeks ago for the “best place to see Sakura in Osaka” suggested our next location, “expo 70 park” in the northern town of Suita, a suburb of Osaka.

Built for Japan’s great world exposition in 1970, expo 70 park is a legacy project which utilizes much of the infrastructure left over after the expo wound up in September 1970.

Before getting started on my description of the park and the Cherry Festival which we found ourselves involved in, i should state that the camera on my mobile phone didn’t do justice to the numbers of people and Sakura trees involved. I’m hoping that the images captured on my main camera will, but im not confident as it is difficult to describe let alone photograph the sheer scale of the festival!

Containing around 5500 cherry blossom trees, the festival is a riot of white, pink and vermilion as tens of thousands of visitors wander around the park, picnicking, photographing and generally just enjoying their day out in the sun surrounding by the amazing spectacle of Hanami in full bloom.

The whole thing had the feel of a summer music festival rather than a natural phenomenon and the crowd was loving the show.

Everywhere you looked there were families playing in the sun, boating on the lake, eating traditional foods, laughing and just appreciating this fleeting display by nature.

Every little breeze was accompanied by a blizzard of blossom leaves which settled on visitors and the pathways like confetti. It was like walking in a snow globe for a while! 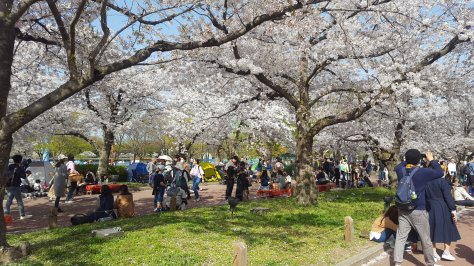 It was such a privilege to be able to experience the festival at full bloom, so we wandered around aimlessly for a while just enjoying being there before settling down near a line of food tents with a couple of ice cold Asahi beers to relax in the sun.

Watching families playing football, baseball and flying kites we reflected on just how lucky we were to be here and just how fleeting this event really is. A trip this time last week would have probably found an almost empty park, as would a visit a week from now… out timing has been perfect!

After a break we decided to return to the monorail station and retrace our route back to Umeda and then Daikokucho and the apartment.

All in all, today has been the best day so far in terms of photo opportunities. If I’ve captured a single image today which encapsulates even a fraction of what it was like to experience the festival then I’m sure I have an image which will find pride of place in my exhibition back in Glasgow in July.

Tomorrow is a free day. We had planned to do everything we did today, tomorrow, but we brought it forward for fear of missing the peak of the blossom season.

We may visit Himeji, or possibly go back to Kyoto. I’ll let you all know tomorrow!

In the meantime, I’m sure ill be dreaming of blossoms tonight, it’s pretty much all I’ve seen all day!!