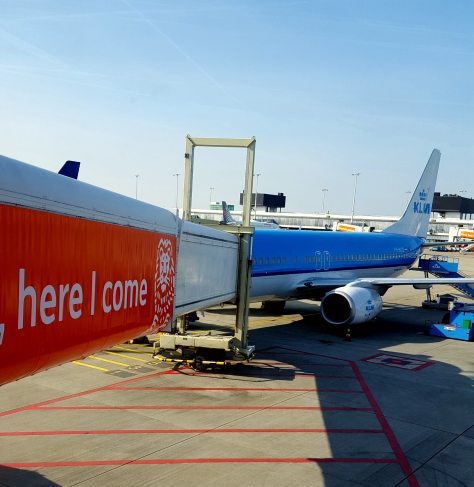 Skip and a jump across Northern Europe

Day 1 began with a 2.30am rise, a brief drive to Glasgow International Airport, breakfast (and obligatory first beer of the trip!) then an early morning short flight to Schipol, Amsterdam for the connecting flight to Helsinki.

Hindsight is a wonderful thing and I now realise that I probably should have seen some problems looming on the horizon when the captain of the flight announced that, despite it only being 6am, air traffic control had instructed him to delay take off due to congestion in the skies over Amsterdam.

When we finally did take off we were facing the prospect of a very short connection time at Schipol.

Thankfully the long dash from the end of Pier D to the departure gate on Pier C was helped slightly by sidestepping passport checks thanks to the automated EU Passport scanning service. (Should be a much more “interesting” experience in a post Brexit world!) and we made our connection with 20 minutes to spare.

The 2hr 20 minutes flight from the Netherlands arcs north east over Denmark and southern Sweden before crossing the Baltic Sea to reach Helsinki on the southern coast of Finland. The flight was relaxed with a lovely in-flight meal of pasta and wine to help while away the miles..

At Helsinki baggage collection, we watched with increasing frustration as the circling luggage was picked off piece by piece, much like watching predators strip a carcass, until half an hour later, we faced an empty carousel, stripped bare, as it rattled slowly around with each lap confirming the annoying truth that our luggage hadn’t made the connection.

A brief conversation with the arrivals service desk staff, followed by a couple of keystrokes on the computer terminal confirmed that the luggage had indeed made it to Schipol, been weighed, but inexplicably left off the flight…

KLM cheerfully advised that the luggage would be placed on the next available flight and brought to our hotel in central Helsinki.

With the next flight expected in at 5pm, and another at midnight it seemed like a possible win-win as the trip from the airport was suddenly made all the easier without the burden of dragging luggage through the streets of central Helsinki.

We took the airport bus to the city centre, a relaxed 30 minute tour around the outskirts of the city, then, getting off at the square next to the main train station, we set off for what turned out to be a very brief 5 minute walk to the hotel.

After a short break at the hotel, and the removal of most of my camera gear from my hand luggage to lighten the load, it was time for a quick exploration of central Helsinki.

First impressions are very good, with the city having a very distinctive look and a relaxed atmosphere.  The people seem very friendly and their fluent grasp of English is a huge benefit as im embarrassed to say that my knowledge of Finnish, or even Swedish (which most people also speak fluently) is zero.

I grabbed some reference shots, mainly of the cathedral and surroundinf street scenes, and im looking forward to revisiting those areas when the light is better.

Weather will be interesting throughout the visit. At 3pm today it was warm, sunny and slightly humid, by 5pm it was overcast, freezing and windy, 9pm saw snow turn slowly to sleet and finally to heavy rain. Felt like a typical Glasgow summers day really!

So… to the luggage.  The 5pm flight came, and presumably went but didn’t include our luggage. A brief nap had me awake again at midnight ready to receive the anticipated baggage but at the time of writing (2am) I’ve had no delivery and no further updates from my friends at KLM…

Tomorrow should be interesting with no change of clothes and no toiletries!